Start a Wiki
The Zy-98 Shadow is a third generation Arm Slave operated by Amalgam and Soviet Union. Similar to the Rk-92 Savage, the Zy-98 lacks a Lambda Driver but serves as Amalgam's answer to the M9 Gernsback.

Later Zy99 variants will enter limited service for the Soviet army and offered on the Export market.

The Shadow is an Arm Slave developed by the USSR to succeed the aging Savage, In terms of weapons layout, the Shadow has no defined weapons payload as its seen throughout the series operating many different weapons (Some but not limited to: a Gatling gun, pistols, and semi-automatic). however the Shadow does utilize Electronic Concealment Systems (ECS) similar to the M9 Gernsback.

By the time of the first series, Amalgam operates at least one Shadow (as seen in the usage of Zaied) and a second operated by the Xia Yu sisters.

Kurtz Webber will be supplied by the KGB with a improved Sniper variant of the Zy99 to assist Mythril in the battle for a Afghan missile base against Amalgam forces loyal to Leonard Testarossa.

The Shadow seems to be operated by Amalgam's more talented pilots, this can at least be said in the first series, as the only ones to operate the Plan-1056 Codarl are Gauron and Gates. The Shadow by the second series however seems to have replaced the Savage entirely. Moreover, talented AS pilots seem to operate the standard Codarl while the "aces" (such as Gates) of Amalgam operate the Plan-1058 Codarl-i (better known as the Venom) and standard Codarl. While not equipped with a Lambda Driver, the Shadow is a formidable opponent, as seen in the Afghan desert, in which Zaied destroys nearly all of Bill's M9 squad single-handedly. However when fighting the superior ARX-7, Zaied is killed (though not without significant difficulty.)

Although not seen in the Giant Killing Arena, Parts for the Zy98 are available for Sale. [1]

At the last arc of the novel, we can see that USSR has started to deploy this 3rd generation AS, when several battle groups engage the forces of Amalgam that had at the time hijacked a nuclear missile base in Afghanistan. The groups were wiped out.

Seen used in The Wind Blows at home, This unit appears either customized or as a Pre-production unit. His unit is Red in Color and uses a large caliber Gatling cannon.

Used by Xia Yu Fan in The Balic, As well as Battle of the Tunnel. This unit is Grey in color and uses large Mono molecular cutters.

A Unit was given to Kurtz Webber by the KGB to assist Mithril forces. It's notable for it's different head structure which is far closer to the latter Zy99M It is also fitted with a drop down visor and large sniper rifle.

The Zy99M is a export version introduced before 2011. almost Identical to the Zy99 but a with reduced output OL4 Palladium reactor. This is intended to reduce performance of the machine for political concerns. The DOMS PMC has secretly retrofited an Zy99M with a Russian OL3c Reactor bringing performance spec back to Russian Military specification.

The Zy99M Special mission type was created for special functions like Electronic scouting and Electronic warfare where the limited AI of the Zy99 was found wanting. As such it features a second seat and large electronics package, Only a limited number of such units were produced. One was Procured by the DOMS PMC and customized with extended limbs and Other modifications for a sniper Role. 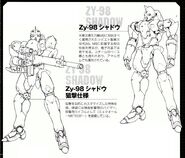 Concept Art for both the standard Shadow and the Sniper Ver.


Cite error: <ref> tags exist, but no <references/> tag was found
Retrieved from "https://fullmetalpanic.fandom.com/wiki/Zy-98_Shadow?oldid=9153"
Community content is available under CC-BY-SA unless otherwise noted.