The TDD-1 Tuatha de Danaan (トゥアハー・デ・ダナン) is the world's most advanced submarine and is Mithril's flagship. It is classified as an Assault Landing Submarine and houses a variety of AS, aircraft and other small vehicles. In addition to its revolutionary hull design, the Danaan possesses a sophisticated Artificial Intelligance called Dana. In a sealed area of the ship called the Lady Chapel, a TAROS device is installed for Whispered use.

It was originally an abandoned Soviet submarine but was procured and rebuilt with Teletha Testarossa's knowledge. 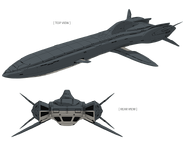 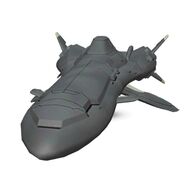 ARX-7 about to land, illustrating the Danaan's massive size.

The work stations on the bridge.

Art Board of TDD-1