The Rk-92 Savage was developed from the Rk-91 Savage, though it differs in having a gas turbine engine rather than a diesel piston engine. It is a mass produced Arm Slave from the Soviet Union. It is the most ubiquitous AS model amongst modern communist nations and has also seen use by terrorist and crime organizations. The Savage has less armor than many European and United States Arm Slaves, but it does have increased maneuverability. It usually appears in sand, gray, or olive colors to blend in with terrain. The best features of the Savage are without a doubt its low cost and high availability relative to other AS models. Variants of the model and spare parts can almost always be found on the black markets.

The Rk-92 has served as the front-line Soviet Army AS unit for many years. One of the titular second generation Arm Slaves created by the Soviet Union in 1992 after the Gulf War, the Savage is a mass produced unit used by the Eastern bloc. It has also been exported to other communist nations, including North Korea and North China.

Due to the frequent political instability of its operators, the Savage is often found in the hands of separatist and terrorist organisations.

It has been noted to have seen extensive service with many groups, notably:

The Rk-92 was used by the Soviet Army during their re-invasion of Afghanistan, where it was frequently used to assault resistance positions. A number of Rk-92’s were captured by resistance fighters and used against the invading Soviets.

After the Amalgam highjacking of a Japan Airlines 747 enroute to Okinawa to mask the abduction of Kaname Chidori, the plane was flown and landed at an Air Base in North Korea, where several Rk-92’s were tasked with guarding the plane on its arrival.

During his rescue of Kaname, Sousuke Sagara commandeered an Rk-92 from a storage hanger prior to engaging and destroying several similar ASes and other fighting vehicles. The Savage then fled the air base prior to being destroyed by the Plan-1056 Codarl.

On detecting the arrival of the ARX-7 Arbalest to Sousuke, the local militia sent five Rk-92s to destroy it, however they were hopelessly outclassed by the 3rd Generation machine, which managed to destroy all of the attacking Savages within one minute.

The Japanese terror movement A21 used an Rk-92 to attack a Japanese military research facility, in an effort to free one of their specially trained Arm Slave pilots who was being held there for interrogation. The surprise nature of the attack decimated the protective forces stationed at the base, however several key Mithril members were able escape and relocate the objective to another location.

Several Rk-92 units were used to guard a nuclear missile that had been stolen as it was relocated across Helmajistan.

On the failed intervention of a special Mithril AS force to halt the relocation, the Rk-92s were then used to hunt the retreating party.

Several Rk-92s formed part of a rebel force that kidnapped the presidents daughter, and held her hostage at an ancient site.

A quickly assembled Mithril force from a local selection camp was able to demobilise the legs of one unit, prior to its upper torso being commandeered by Sousuke. He then used the intact upper section to destroy the remaining Rk-92s and suppress the remaining rebel troops, allowing for the release of the hostage.

Numerous Rk-92s were used in the Nanking Tunnel hostage incident by Amalgam forces, including the capture of five members of a diplomatic body negotiating the extension of peace between North and South China. Two Rk-92's acted as escorts of the hostage takers escape vehicles, shooting down pursuant attack helicopters and breaking through police blockades. They were later used as part of an elaborate trap in the tunnel, where the primary aim was to capture the ARX-7 Arbalest. Some of these acted as decoys to draw the Mithril AS units into position.

Units equipped with the Rk-92 were deployed to guard the border between the People's Liberation Committee and the Democratic Chinese Alliance when Xia Yu Fan attacked in a Zy-98 Shadow.

An Amalgam strike team utilised an Rk-92 to intercept a Mithril effort to abduct defector Vincent Bruno, who had earlier led their forces into a trap during a rescue effort in China.

The AS was intercepted and destroyed by Ben Clouseau in his M9D Falke.

Several privately owned Rk-92s were operated in Gladiator-style stadium battles for entertainment and gambling purposes, notably in the city of Namsac. 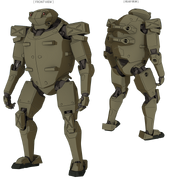 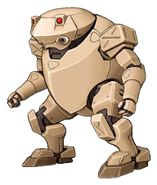 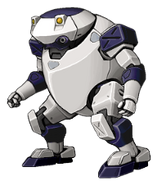 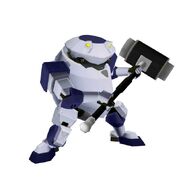 Rk-92 used by Nami's team, as seen in Rotten Repose.

Community content is available under CC-BY-SA unless otherwise noted.
Advertisement