Richard Mardukas is the Commander of the Tuatha de Danann and second only to Captain Teletha "Tessa" Testarossa. He is British and served on many submarines before joining Mithril.

Mardukas is generally a dry, straight-laced, and conservative man. He is extremely pragmatic in both military and non-military matters. His pragmatism is the source of much of his reaction towards various other characters. For example, despite being a legendary and highly capable submarine commander himself, he displays great loyalty and dedication towards Captain Testarossa and follows all of her naval commands without question due to his acknowledgement of her unmatched ability to command the highly advanced de Danann. On the other hand, he shows questionable respect for Sagara Souske due to various unprofessional acts carried out by the sergeant. He also divorced his wife, seemingly without much regret, due to the incongruous nature of his job and married life.

Mardukas has also been shown to be very straightforward to the point of being blunt with anyone, even the captain. Despite this, beneath his cold exterior lies a personality that seems to be able to show caring for others. He has been shown to care about Captain Testarossa's well being, perhaps stemming in part from the fact that he was friends with her father.

Mardukas is Captain Testarossa's executive officer. Although he has been shown to be unconditionally loyal to the captain, he is not afraid to voice any disagreements he may have. Testarossa is always willing to explain the reasoning behind her decisions, and this almost always is enough to quell any concerns Mardukas might have.

Off the bridge, Mardukas occasionally acts as a mentor and confidant to Testarossa. Testarossa, who as a teenager is very young and inexperienced for a submarine captain, often accepts guidance from Mardukas and his wealth of wisdom regarding matters of the military.

Mardukas was also friends with Testarossa's late father, a fact that was not known by Testarossa until late in the series. 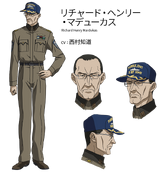 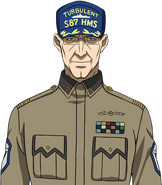 As seen in Super Robot Wars V
Add a photo to this gallery
Retrieved from "https://fullmetalpanic.fandom.com/wiki/Richard_Mardukas?oldid=9260"
Community content is available under CC-BY-SA unless otherwise noted.