The more developed Lambda Driver from the Codarl-i - capable only of being used to its full potential by expert pilots - is retained. So is the special cooling array located on the back of the AS in the shape of a large surfboard like fin.

Fowler quickly gained the upper-hand on Ben Clouseau's M9D in close combat, Rechnio outclassed Melissa Mao's M9E electronic warfare capabilities, and Casper heavily damaged Kurz Weber's M9 with his superior sniping skills. Before the killing blows could be made however, a strike force of rival Amalgam forces unaligned with Leonard, comprised of three Behemoths and three Codarl-m types attacked the base. This forced the withdrawal of the Erigors back to support the full retreat of Testarossa's forces to the next location.

Rechnio and Fowler's Erigors were also deployed to capture and protect a former Soviet nuclear missile base in Afghanistan (Helmajistan) against a Mithril SRT led attack. 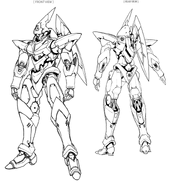 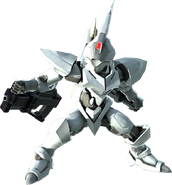 As seen in Full Metal Panic! Fight: Who Dares Wins
Add a photo to this gallery