The Plan-1056 Codarl is a third generation Arm Slave operated by Amalgam. Mithril codename "Venom", the first Lambda Driver-equipped Arm Slave in Amalgam's arsenal. The Codarl series is based on the frame of the USSR's Zy-98 Shadow.

The Codarl is an Arm Slave developed by Amalgam and is known to be the first to utilize their experimental Lambda Driver. Specific design data on the Codarl are not known, but in combat it has outclassed the M9 in both speed and agility even without using the Lambda Driver. The Codarl limbs were modeled after feline and insect legs giving it added mobility and jump distance. Its most distinctive feature is the pony-tail like attachment, which serves as its heat sink.

The Codarl is used only by Amalgam's elite pilots, such as Gauron, all of whom appear to have been trained in the use of its Lambda Driver. The preferred armament of choice of Codarl pilots are melee weapons since the force of the Lambda Driver makes conventional long range weapons obsolete. However, the unstable but powerful ARX-7 Arbalest proves to be pound for pound superior, heavily damaging Gauron's Codarl in North Korea during its first deployment and destroying it entirely when the two clash in Helmajistan, forcing him to rely upon the improved Codarl-i in the final battle aboard the Tuatha De Danaan. 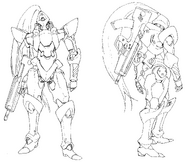 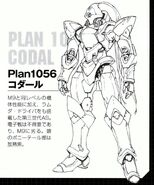 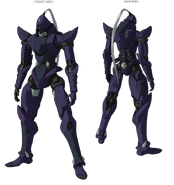 Retrieved from "https://fullmetalpanic.fandom.com/wiki/Plan-1056_Codarl?oldid=9157"
Community content is available under CC-BY-SA unless otherwise noted.