The Plan-1055 Belial ( プラン・1055 ・ベリアル , Puran 1055 Beriaru ) is one of the worlds first 4th-generation Arm Slaves. It is Leonard's personal AS, and he uses it to destroy the ARX-7 Arbalest. Its only known weapons are its claws and a bow.

There isn't much information regarding Belial development, it is known to be designed by Leonard Testarrossa himself, based on the chassis of the ZY-98 from the USSR.

Belial is the first 4th generation AS in the world, and possess a rather stable, functional, and powerful Lambda Drive. Its most interesting feature is its flight capability due to the Lambda Drive, followed by its special Bow that delivered near instant massive damage via the Lambda Drive.

The first operational mission of the Belial is the kidnapping of Kaname Chidori in Tokyo. While Amalgam forces were costly defeated, the Belial arrives as the last opponent and easily destroys the ARX-7, only using its claws.

After the deployment in the URSS and the subsequent mission in Yamsk-11, Belial faces the 2nd 4th generation AS produced, ARX-8. The fight is a balanced one, and the deployment of the Fairy's Feather nullifies some of the offensive and mobility capabilities of the machine, the struggle is interrupted with the arrival of Soviet Forces in the area.

The last engagement of the Belial is a duel against the ARX-8 in the 2nd Battle of Merida Island. The unit, after a tough fight, is completely destroyed.

The Belial as it appears in the novel

The Belial, as seen in Super Robot Wars Z3 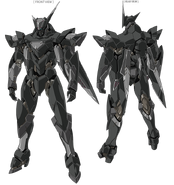 Retrieved from "https://fullmetalpanic.fandom.com/wiki/Plan-1055_Belial?oldid=9161"
Community content is available under CC-BY-SA unless otherwise noted.