The M9 Gernsback (ガーンズバック) is a third generation Arm Slave. It is primarily used by Mithril and is named after Hugo Gernsback, a pioneering science fiction author. It is currently undergoing operational evaluation (OPEVAL) by the United States under the prototype designation of XM9 to replace the M6 Bushnell.

M9 units were seen being deployed by USSOCOM elements in the Raid on Leonardo Testarosa's Mexican Safe house.

The M9 is Mithril's current front line Arm Slave, having replaced the M6 series in this role around 2001. The M9 Gernsback was developed with cooperation from the United States. It is highly maneuverable and is very versatile in deployment and weapon configuration. The M9 comes equipped with an advanced ECS system which allows the use of optical camouflage.

M9 Series Armslaves differ from the Previous Second Generation by using extensive use of various forms of Electroactive polymers Rather then More conventional Hydraulic and Pneumatic found in older generations. This reduces weight, speeds reaction time, reduces noise and increases power. This however can be taken advantage of as if the M9 is crushed beneath heavy weight the system is unable to extricate it's self.

Also unlike the Previous generation of Armslave M9 is powered by a Palladium reactor removing Engine noise from potential issues.

M9 is noted for it's impressive dexterity and articulation being able to mimic it's operators movements down to even a shoulder Shrug.

M9 Units were fielded by Mithril before the US Initial Operational Capability was established. As such they were used in a number of small scale counter terrorist raid and missions, including operations in Siberia, North Korea (Lake Khanka), Afghanistan (Helmajistan), Berildaob island in the Republic of Palau, Balic ( somewhere in Africa),The Yangtze Tunnel, Scicily, Hong Kong, Merida Island, Nam Sac Laos, San Francisco USA, Mexico and across the globe before US entry into service. After Amalgam's war on Mithril, a number of former Mithril M9E units were captured by Amalgam and used as part of "Aggressor Squadrons".

The First confirmed US deployment was in Mexico by Elements of US SOCOM.

The M9 easily outmatches earlier Arm Slaves in maneuverability and speed, though it has been defeated in combat against second-generation and third-generation Arm Slaves with skilled pilots. It also has suffered against machines fitted with Lambda Drivers.

The M9E 006 was the new variant Gernsback given to Melissa Mao after her original M9 was destroyed by the Behemoth. The M9E has additional electronics warfare equipment along with the standard ECS package. The most notable difference is the outcrop on its head which functions as a communications and jamming antennae. Its overall operational battle time is reduced due to the extra power consumption and it has less room for reserve ammunition to provide space for its extra electronics. But the M9E is a mobile command post and comm station that is essential on missions far from support.

The ARX-7 Arbalest is a custom made variant of the M9E and is also designed by Bunny Morauta. The Arbalest is the only Mithril operated Arm Slave to be equipped with the Lambda Driver. It is also equipped with a sophisticated AI and data logging system. As a result, its operation time is lower than the standard M9E, but is otherwise identical in performance. The only unit in existence is piloted by Sousuke Sagara.

M9 in initial US Issue resembles M9E 006 save for differences in Optics and Face plate has Electronic warfare antennae. Deployed to Mexico as part of US Socom Delta Force Raid on Amalgam safe house. secondary changes include simplified AI unit and is powered by a General Electric P101 Reactor reducing power output. omission of Secondary armament in the head of the AM11 Chainguns in favor of a Right arm mounted GAU 19/S 12.7x99mm Gatling gun and a XM18 wire gun. Reducing Speed 200 Km/h and Jump performance 40m for a more manageable machine. Weight has increased to 10.3 metric tons. but an increased maximum operation time of 160 hours.

Came into use before 2011 after the fall of the Soviet Union in 2001. Outwardly similar to the M9, the M9A1 is "bulked up" with increased armor to deal with more Asymmetric threats resulting in a weight of 11.9 metric tons. M9A1 uses the GE P101 Reactor, and as a result of its additional armor, it can only attain 150 km/h and its jump range is 25 meters, but it has an operational time of 180 hours.

The M9A1E1 is the heavy artillery version of the M9 series. It is intended to replace the M6A2E2 Bushmaster as an all-terrain artillery unit. it is optimized for electronic warfare and long range fire support on uneven terrain. Arsenal is fitted with a different head unit and additional modules including sensors, structural modifications include the addition of retractable struts to brace for heavy recoil. The system can be used as a control node. They also mount standard Missiles but the main armament is a howitzer, either the M119A3 105mm, used with the M6A2E1, or the Seward Arsenal AGS 3 155mm, which uses a recoil buffering system to allow for an Arm Slave to fire such a monster canon, A system only second to the 165mm Seward Arsenal Multi-purpose Demolition Howitzer used on the ARX-8. The M9A1E1 Gernsback Arsenal is the heaviest of the M9 series at 15.8 Metric tons. it is the tallest variant of the M9 at 8.6meters and the slowest, with a top speed of 110km/h, also with maximum jump reduced to 15 meters. It can operate for 160 hours.

The closest in performance to the original Mithril Spec M9E the A2 Enhanced returns to a Ross & Humbleton APR series Reactor in this case the APR2800 with increased power output to 2800kw. 160 hur operating time, increased top speed to 220 Km/p with a 45m Meter jump range come from this as well as a reduction in weight back to 9.9 metric tons and improved muscle packages. Additional improvements include the Addition of a single Sub arm and a more advanced AI interface that assists in maneuver control. M9A2 Enhanced Head unit more closely resembles that of the Mithril.

The final known form of the Gernsback. The M9A2 SOP offers performance equal to if not beyond the Mithril M9E. Using the M9A2 Enhanced as the base chassis but heavily upgraded It is designed and Tuned for Special operations elite operators. Including changing of the Reactor to the new SPR3300 series with 3300 kw power output matching the M9E upgraded muscle package, custom armor and head. The SOP is 10.5 tons, with a 250Km/p top speed, a 50 meter Jump range, and height of 8.5 meters. The new Head resembles that of the ARX7 and has stereoscopic vision systems. SOP features improved ESC invisible mode and a return of the dual mounted M11A1 12.7mm Chain gun ports replacing the arm mounted Gau19 in previous production M9. unlike the base Enhanced M9A2 the SOP A2 requires a more skilled hand to pilot it, it built in limited numbers for US Special Operations. Weapons load out is unique to the SOP version apparently replacing the standard 40mm Oerlikon Contraves GEC-B series rifle with the H&K SG8 35mm rifle. 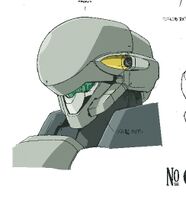 Concept Art of Torso and Head of a Standard Gernsback

Concept Art of Torso and Head of a Gernsback 006 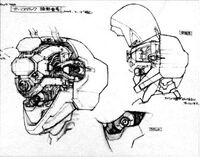 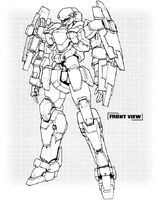 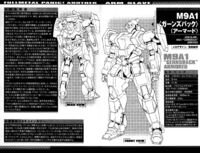 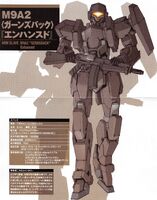 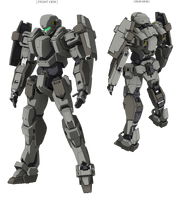 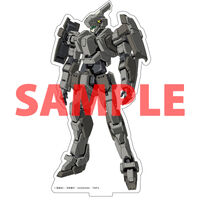 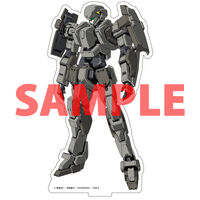 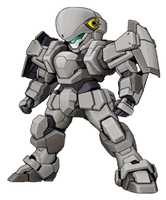 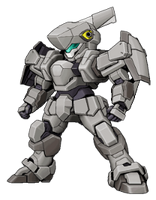 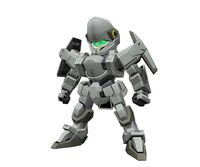 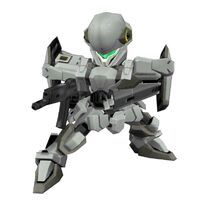 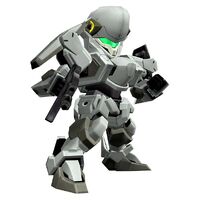 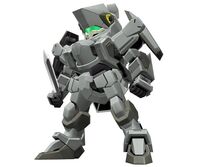 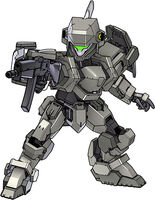 Retrieved from "https://fullmetalpanic.fandom.com/wiki/M9E_Gernsback?oldid=10322"
Community content is available under CC-BY-SA unless otherwise noted.