"I belive there are only two kinds of women: The ones who look good in the rain and the ones who don't."
―Leonard presenting himself to Chidori.

Leonard Testarossa ( レナード ・ テスタロッサ  , Renādo Tesutarossa ) is Teletha Testarossa's older twin brother and a high-ranking member of Amalgam. He is the series' primary antagonist and an arch nemesis to both his sister and Sousuke. His personal Arm Slave is Plan-1055 Belial. He is a child prodigy and a Whispered like his sister.

Leonard was born less than 3 minutes before Teletha, and the two of them share the rare occurrence of both being Whispered.

As a child, Leonard was known for solving complex mathematics at the age of three, and is often considered as more developed in whispered talents than Teletha in many regards.

As a young child, his mother Maria willingly offered him to a group of kidnappers in an attempt to save herself from harm, while protecting Teletha. Leonard was taken and indoctrinated into the group known as Amalgam. He never forgave his mother for her actions.

Within Amalgam, Leonard is known as "Mr. Silver" and is part of the upper circle. It is understood that his superior Whispered intellect has both generated and proliferated the organisations Arm Slaves, Lambda Drivers, TAROS and othe Black Technology weaponry. He is typically credited as the developer of the Codarl (Mithril codename Venom) type AS, the miniature Alastor types and the Behemoth. The peak of his knowledge is shown in his own personal Arm Slave, the Belial, which was the only fourth generation AS in existence until the arrival of the Laevatein. The Belial far exceeds even the Erigor type AS of top Amalgam operatives and utilises the Lambda Driver to unprecedented levels.

While charismatic and supremely confident in his intellect, Leonard also has a strong physical prowess and mastery in piloting the Arm Slave, as demonstrated when he easily defeated the ARX-7 Arbalest, piloted by Sousuke Sagara. It is accepted that Sousuke only survived the battle due to intervention from Kaname Chidori.

Leonard claims to be in love with Kaname, finding her strength of character and stubborn nature attractive. In the anime version, Full Metal Panic! The Second Raid, he earns her contempt by forcefully kissing her. Although he accepts that her feelings are for Sousuke, he is enamoured by her and hopes that she will come to love him in return.

Later, Leonard kidnaps Kaname for his own purposes, and begins a relentless pursuit by Sousuke, as well as the remaining Mithril forces. He also incites an anti-Leonard sentiment within the management levels of Amalgam, who wish to punish him for his betrayal to their own agendas. 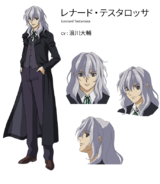 As seen in Full Metal Panic! Fight: Who Dares Wins
Community content is available under CC-BY-SA unless otherwise noted.
Advertisement