After Sousuke arrives back at Merida Island, Tessa berates him for emotionally involving himself with Chidori and neglecting his other duties. Lt Belfangan Clouseau, the pilot of the AS seen in the Sicily operation, transfers to the SRT as its new commander. After he clashes with Kurz at the bar upon offending the memory of the SRT's dead comrades, Clouseau stages an AS duel to help Sousuke properly operate the Arbalest. 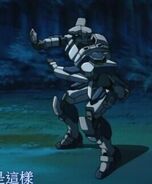 Arbalest during his fight against M9D Falke
Add a photo to this gallery
Retrieved from "https://fullmetalpanic.fandom.com/wiki/Jungle_Groove?oldid=9588"
Community content is available under CC-BY-SA unless otherwise noted.