Mike Vance
Gavin Hunter is an agent in the Mithril Intelligence Division, originally based in Hong Kong. He first appears in Full Metal Panic! The Second Raid.

A supposed native of Hong Kong and an officer in the Mithril Intelligence Division, Hunter was responsible for providing support for the tactical operations of the Western Pacific Fleets SRT team as they searched his home city for a rogue Codarl-m Arm Slave. This Codarl's unpredictable and violent actions against both North and South Chinese armed forces created tension between the two and almost led to the re-starting of the Chinese Civil War. He was very active in using his connections to temper politicians on both sides during this time.

He's also known to the Hong Kong public as a businessman with multiple businesses in operation, including the Hunter Cleaning Company Ltd. that was used as a cover for Mithril during their search for the Codarl. He provided SRT members such as Melissa Mao and Corporal Yang with service vans and uniforms of his company to patrol Hong Kong and Kowloon without raising suspicion from the North and South Chinese armies and police.

Hunter is mostly known for his smiling and happy demeanour despite the pressures of his job, but can get angry at times, as shown by an expletive loaded outburst when he realises that the re-start of the Chinese civil war is imminent.

Hunter also assists fellow Mithril intelligence officer Wraith by advising her on the whereabouts of Kaname Chidori and Sousuke Sagara after the Battle of Hong Kong.

Hunter is an extremely loyal Mithril agent, and when it collapsed during Amalgam's first strike he retreated with Wraith to Alaska, helping run an existing covert operation to build the next Lambda Driver equipped Arm Slave with the recovered Whispered Mira Kudan. Suspecting a leak in Mithril Intelligence might compromise its mission, a second Arm Slave - likely a decoy - was produced. This was personally transported by Hunter to be received for combat operations, however he and the AS was intercepted by the new Amalgam officer Mr. Kalium, who knew of the new Arm Slave program during his time with Mithril.

During this encounter, Hunter was shot in the abdomen by Mr. Kalium and left to bleed out while the AS was stolen and shipped to an Amalgam facility in Mexico, where it was destroyed.

Hunter managed to survive this encounter and took on the responsibility of guarding Mira Kudan, providing valuable intelligence support to Mirthil's remaining forces in later operations. 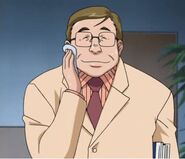 Hunter and his handkerchief.

Hunter (on right) with Mira and Wraith from FMP IV episode 9
Community content is available under CC-BY-SA unless otherwise noted.