The C3-5 Mistral II is unique in construction, unlike the M6 Bushnell, Rk-92 Savage and European counterparts like the Drache and Cyclone the C3-5 is only vaguely humanoid, as it lacks a real "head" and has an unusually shaped torso. While with slightly better armor, the C3-5 is also below par of other Arm Slaves in terms of speed.

Aside from its deployment with the French Military, the Mistral II has widespread use as the leading Arm Slave with foreign armies, courtesy of export sales. One such customer was the National Army of the Republic of Balic, who under the lead of Colonel Maress utilised several platoons of Mistral II's to combat both resistance fighters and intervening Mithril SRT M9's in Taboli city during its civil war.

A number of combat retired Mistral II's fell into private hands and were repurposed as stadium fighting machines for Gladiator style battles. These Arm Slave battles are a popular novelty, entertaining huge crowds in cities like Namsac, Laos, among others. 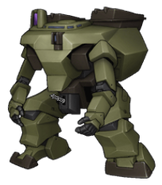 Customized Mistral II (on left) in FMP IV episode 8
Add a photo to this gallery
Retrieved from "https://fullmetalpanic.fandom.com/wiki/C3-5_Mistral_II?oldid=9970"
Community content is available under CC-BY-SA unless otherwise noted.