The Merida Island garrison attempts to battle the 3 approaching Behemoths, but only manages to destroy one while suffering heavy casualties. Meanwhile, Amalgam troops land on the island and begin assaulting the base. Tessa orders that the refueling of the Tuatha de Danaan be halted in order to speed up the evacuation process. In Tokyo, Amalgam agents have planted bombs all over Sousuke and Chidori's school in an effort to draw them out. Chidori tells Sousuke that she knew her normal school life wasn't going to last, and she's scared of what will happen next. Sousuke admits that he's also scared, but he's determined to protect Chidori and everything that she loves. They then both agree to come up with a plan to save their friends. 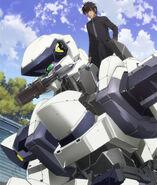 Add a photo to this gallery
Retrieved from "https://fullmetalpanic.fandom.com/wiki/Big_One_Percent?oldid=9694"
Community content is available under CC-BY-SA unless otherwise noted.