Start a Wiki
The ARX-8 Laevatein is a fourth generation Arm Slave. It is based on the ARX-7 Arbalest.

The destruction of the Arbalest at the hands of Leonards’s Belial was a heavy blow to the scattered Mithril forces and to Sousuke personally. However, it was not the end as Wraith salvaged the Artificial Intelligence system and the Lambda Driver, taking it to Alaska. There, Mithril would work on a new Arm Slave. The suit was designed by AL, the original AI system in the Arbalest, and worked on by Mira Kudan (aka: Sarah Miller), the girl Sousuke saved in the first episode. Thus, the ARX-8 Laevatein was born.

The suit was designed by AL for direct combat engagement and specifically modified to suit Sousuke’s battle style, making it even more powerful. This called for a high output-power plant and an enhanced muscle package which is easily seen in the arms. These new systems and advancements give the suit exceptional strength and mobility far beyond what the Arbalest could achieve. In the front of the suit, there are two smaller arms hidden within the frame. This allows the suit to throw grenades and even Anti-Tank Daggers without having to use its own arms. The suit’s paint scheme is meant to give it a fiery feeling in battle. Wraith once said that she could feel an intense heat from the cold Lambda Driver, meaning it wanted action. When the Lambda Driver is used, cooling fibers come out from behind the head, giving it a similar look to the Codarls’ ponytails when their Lambda Drivers are active.

One last addition was the Fairy's Feather system, it was designed by Kaname Chidori during her captivity in Mexico and acquired by the Mithril remnants during their unsuccessful raid at Leonard Testarrossa base. While deployed, it would cancel all the operations of Lambda Drives in its action radius, making it a trump card against Belial

The ARX-8 does not make an appearance until Come Make My Day. Its first appearance is an overwhelming sense of power that Sousuke can feel after the suit lands. He recognizes the voice calling out as AL asking permission to enter this new war. In battle, the suit single handedly destroys three Behemoths and three Codarl units in a record time of five minutes and fifty two seconds. It is well-recognized for its raw power and strength making it the number one target for Amalgam. In Nick of Time it is targeted for destruction but slips away to fight again. Later in that novel, Sousuke encounters Leonard’s Belial and the two have a rematch. However, the fight is cut short when they are trapped underground. Forced to cooperate to get out they hold off their match until later. In the second part the two battle again but this time Sousuke uses the power of the Fairy’s Feather to cancel out Leonard’s Lambda Driver. However, this means that Sousuke cannot use his own Lambda Driver making it a battle of skill. The fight ends with Leonard taking damage but before it could be settled reinforcements arrive and Sousuke is forced to retreat. The lasting damage, however, Leonard now had to recognize that the two suits were now equal.

Its last deployment was during the Second Battle of Merida Island when a small crew of the Mithril remnants arrived with the Tuatha de Danaan and the ARX-8 as its only ground troops. It defeated several Codarl units along with 3 Behemoths. The unit was destroyed in the last fight against Belial, while the core was still active AL asked its operator, Sousuke, if it was alive or not, to which he responds," think for yourself". Following that response AL deployed on his own a protective field using the Lambda Drive, saving himself/itself and Sousuke from the nuclear missile launched from Afghanistan earlier. 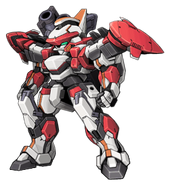 Add a photo to this gallery
Screenshot

Sousuke Sagara tries out the Demolition Gun in Gun-Howitzer Mode in Make My Day. 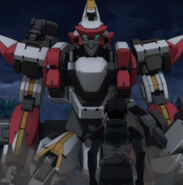 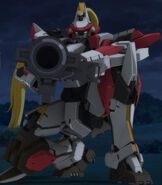 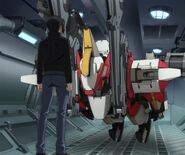 The Robot Damashii booklet for the ARX-8 Laevatein. 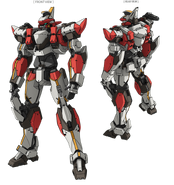 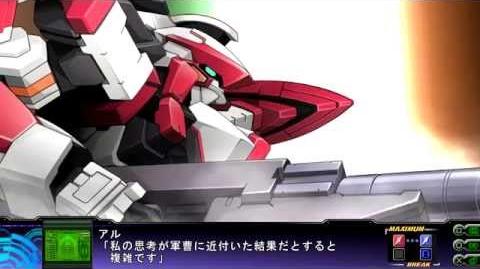 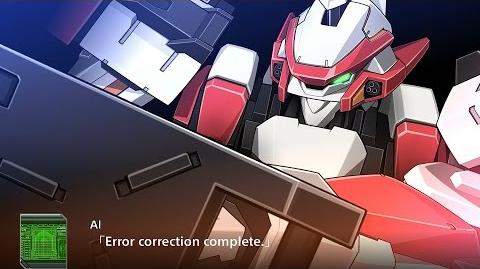 Retrieved from "https://fullmetalpanic.fandom.com/wiki/ARX-8_Laevatein?oldid=9943"
Community content is available under CC-BY-SA unless otherwise noted.